Fifteen years ago this past December 1st, Ukrainians overwhelmingly chose to renew the independence of their country and in doing so, joined the community of democratic nations. 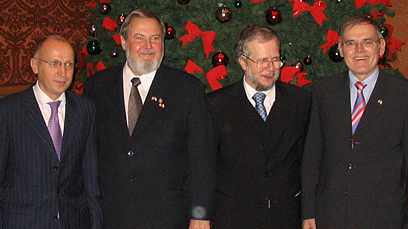 Fifteen years ago this past December 1st, Ukrainians overwhelmingly chose to renew the independence of their country and in doing so, joined the community of democratic nations.

As Chair of the Canada-Ukraine Parliamentary Friendship Group, I had the honour of hosting, along with other members of the group’s executive, a reception marking the anniversary of this important moment in history. The Ambassador-Designate of the Ukraine Ihor Ostash and the Ambassador of Poland Piotr Ogrodenski each said a few words to mark the occasion. As well, members of the Canadian-Ukrainian and Canadian-Polish communities attended.

Canada was the first Western nation to recognize Ukraine’s reaffirmation of sovereignty. Canadians have since played a central role in building democratic institutions in Ukraine and in turn, in strengthening the already close ties between the two nations.

By enhancing our economic relationship, we can bring benefits to both Canadians and Ukrainians in their everyday lives. Strengthened two-way trade and investment would help Canada gain inroads into the Eastern European market and in turn, give Ukraine access to Canadian markets and investment. The large Canadian-Ukrainian community – numbering over one million – provides the perfect connection by which Canada can accomplish these goals.

Since laying the foundations of democracy in those early years, the Ukrainian people, with Canada’s and other nations’ help, have surely and steadily strengthened their democratic institutions

Canada will continue to be supportive of all people who strive to achieve freedoms that are brought about by their desire for democracy.

I wish to congratulate the people of Ukraine for their great accomplishment fifteen years ago and for their continued determination to embrace their future within the world of democratic nations.