Ukraine’s new Ambassador presents his credentials to the Governor General

Peter Goldring, Chair of the Canada-Ukraine Parliamentary Friendship Group, was honoured to be invited to a ceremony at Rideau Hall during which time Ukraine’s Ambassador-designate to Canada presented his credentials to the Governor General. 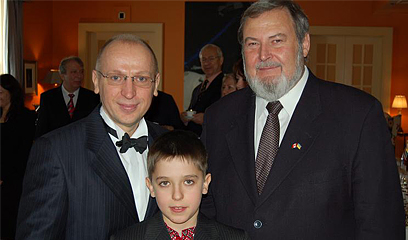 Peter Goldring, Member of Parliament for Edmonton East and Chair of the Canada-Ukraine Parliamentary Friendship Group, was honoured to be personally invited to a ceremony at Rideau Hall during which time Ukraine’s Ambassador-designate to Canada officially presented his credentials to the Governor General.

Ambassador Ihor Ostash presented his Letters of Credence to The Right Honourable Michaelle Jean and in doing so, was officially recognized by the Government as Ukraine’s diplomatic representative to Canada.

“I first met Ambassador Ostash in 2004 in Ukraine during the Orange Revolution when he escorted me into Ukraine’s Parliament,” said Goldring.

At the time, Mr. Goldring was in Ukraine as an election observer for the November 21st Presidential election but then stayed on for ten days to bear witness to the dramatic social and political tensions that unfolded as the Orange Revolution took hold.

Before taking on his current role, Ihor Ostash was a Member of Ukraine’s Parliament for eleven years, during which time he served on several committees, including Foreign Affairs, of which he was Chairman. He was the Vice President of the Organization for Security and Cooperation in Europe for five years.

This past December, Mr. Goldring hosted a reception on Parliament Hill attended by Ambassador Ostash, diplomats, Parliamentarians, and members of Canada’s Ukrainian and Polish communities. The event was held to celebrate the15th anniversary of the recognition by Canada and Poland of Ukraine’s independence referendum.

“As Chair of the Canada-Ukraine Parliamentary Friendship Group, I look forward to building upon our friendship, working closely with Ambassador Ostash to strengthen the economic and social bonds between Canada and Ukraine,” said Goldring.